After stints as Editor-in-Chief of The Ontarion and editor of thecannon.ca, Adam A. Donaldson went freelance contributing to Echo Weekly, the Guelph Mercury, the Waterloo Region Record, New Theatre Review, Women’s Post, and We Got This Covered. He was also on staff for Lucid Forge and Press+1, and along the way created, and still maintains Guelph Politico. When not talking or writing politics, he covers movies and nerdy stuff on Nerd Bastards. In addition, he produces the weekly Guelph Politicast, and co-hosts CFRU’s political and current affairs discussion show, Open Sources Guelph.

Vince Masson is an Independent Filmmaker and Freelance Writer from Guelph, ON. He began his career in community theatre – as a playwright and actor – before moving into film. He worked as a script reader for Toronto-based Chesler/Perlmutter productions, before returning to Guelph to pursue independent projects. His favorite movie (at the moment) is Apocalypse Now. 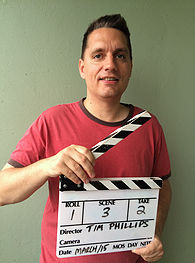 As a teenager, Tim Phillips was inspired by the films of Stanley Kubrick, Brian DePalma, Mike Nichols, and many others, to become a filmmaker. Screenwriting soon became his forte and he adapted his own short story into the short film “Chapter 1” while living in Montreal. Tim went on to complete the Cinematics film production program at Ed Video Media Arts Centre in Guelph, Ontario. As his final project, he directed and co-produced “High and Dry” from a script he co-wrote with his partner Sandra Otter. Since then, under the banner Flash in the Deadpan Productions he has directed short comedy films, “The Joy of Sax”, “Urban Tooth Decay”, “Snooze Tease”, and “Cost of Living”. Tim’s movies have screened at the Route 66 International Film Festival in Springfield, Illinois, Videodrunk in Toronto, and Go-GIFF in Guelph.